Jax, whose real name is Jacky Kahan, is passionate about the art of magic, has collected magic books for many years and became a professional magician a few years back. 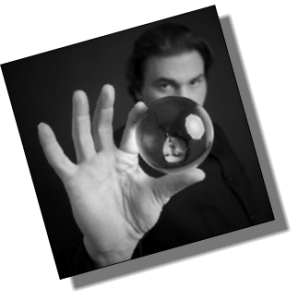 Active in the magic world for more than 10 years, Jax founded MagicCafé Productions (magiccafe.com), a well known worldwide supplier of Magic acts for Film and TV, and regularly organizes events for magicians such as Lectures & Workshops.

Perfectionist that he is, Jax waited more than 10 years before he decided to perform Close-Up magic professionally (magicjax.be).  He simply loves it.

And, most importantly, people Love it ! Jacky a real Artist in the soul, is also sculpting, drawing and painting, but he is a real Wizard with computers. His Digital Art started more than 30 years ago with his first Atari Computer!

Today after more than 30 years ’playing’ on computers he decided to expose and to show his works. Known as Vasareli’s reincarnation and influences of MC Esher, became quite succesful in less than 10 days exposing. Exposing in 2 galleries and participating in two Art fairs in less than 10 days was another great achievement of the Crazy Jax!

Everyhting Jax is doing is inspired by three subjects: magic or illusions, unconsciousness and fractals. If you do not know fractals, you'll find more info below.
With this three subjects Jax is creating incredible artwork. To see the true value, you should really see this in real live.

With the above mentioned subjects and during the last 30 years Jax has created some unique collections. 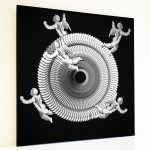 Floating through the air on the wings of angels. An infinite circle of escapism to get away from the stress of everyday. These black and white mythical figures represent the great heights to which art can ascend. You can feel the importance of believing in the supernatural and how it drives Jax to find the power and inspiration to create these works. 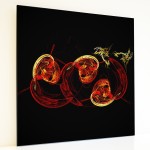 Sometimes all you need is small spark of inspiration to get going. That is exactly what this collection shows. Off all the elements in the world, fire is the most expressive. Bright, colorful and full of life, the fire collection is just a burst of creativity. The beautiful contrast of light and dark just emphasizes the vibrant nature of these works. 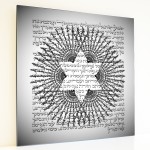 You can never forget where you come from. JAX has his roots close to his heart and is proud of his heritage. Judaica showcases all the symbolism that the jewish faith has given the world.

You will never look at a star of David or Hebrew in the same way. 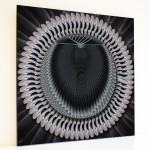 If you put the ordinary things out context and turn them upside down and inside out, you can create something special. Shoes are not just made for walking as you can see here. That's the wonderful thing about fractals : the opportunities to find an unending well of creativity from ordinary objects and colors. Look at the artwork and tell me that you don't see how cool this concept is. 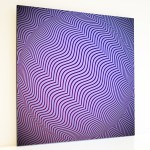 When you look at art, sometimes you can be surprised of what is in front of you. What you see, isn't necessarily what it looks like. Just as with magic, people want to be amazed. These works will have you thinking one thing, but upon further inspection you'll be pleasantly surprised of what lies beneath the surface. 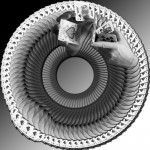 Just as with card tricks,... it's all in the wrists. Flick it around and see what happens when you put it to canvas. That is what Jax is making clear with these works. Cards are more than just cards. Slight of hand is more than just pure entertainment, it's an art form. The same can be said of this collection : it takes years to perfect both.